I caught a CNN IBN show on the excessive use of medicinal drugs and the dangers of over medicating. One segment was on antibiotics and the bacterial resistance to antibiotics. You can listen to the short segment here.

Here's what the reporter said on the effect of excessive antibiotics and not completing the course: You are giving the bacteria a chance to survive and in time they become much stronger and the antibiotics cannot kill them

And Dr. Chatterjee from Apollo Hospital: Bacteria develop resistance to them (antibiotics). Then you have to go for a harder antibiotics and then over a few years you will have no medication for these ailments at all.

I may have missed a few words but what I did not miss was the complete absence of the word evolution.

There can be a real difference in meaning when you say "giving the bacteria a chance to survive and in time they become much stronger" or "bacteria develop resistance" and saying bacteria evolves resistance to antibiotics.

Any population of bacteria in your body will initially be variable in its response to a particular antibiotic. Bacteria replicate at very short intervals and therefore a lot of mutations are arising in a bacterial population (most mutations are due to errors in copying DNA during replication). Under a strong selection environment such as antibiotic treatment, bacteria that happen to have the right mutation that enables it to resist the antibiotic will dominate the population. Bacteria that don't will die without leaving many descendants. The next generation therefore will be a population composed largely of bacteria which are resistant. Several such rounds of mutation and selection might lead to a population of bacteria fully resistant to the antibiotic. The schematic below shows this well. 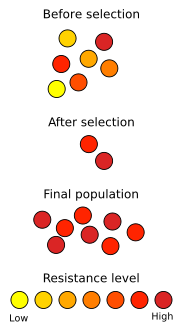 Evolution is not a subject that only helps us reconstruct past events or make sense of fossils or explain the diversity of life. Understanding evolution has real and immediate relevance to several pressing issues we face such as agriculture, animal husbandry, origin and spread of diseases like AIDS and SARS and also how to best set up an antibiotic medication schedule. Understanding evolution let's us plan the antibiotic regimen with the best chance of curing us.

The media and the Apollo doctors missed out on an opportunity to explain that to the people.